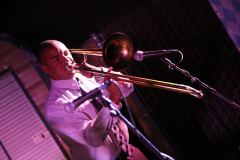 KDRT 95.7 FM teams up with the Davis Music Festival this weekend to present the next edition of Live DiRT. Live DiRT is a live-music feature of KDRT radio – sometimes happening in local venues and sometimes live in the KDRT or DCTV studios. Live DiRT has no fixed schedule, popping up whenever musical artists can merge their touring schedule with KDRT programming.

KDRT will broadcast live during all three days of DMF as follows:

Join KDRT broadcasters for the live-music action at these venues, or tune in live to KDRT 95.7 FM in Davis worldwide. In addition to the musical artists performing at those venues, KDRT DJs and DCTV camera crew will be roving the streets of downtown Davis on Saturday, collecting interviews, sounds and samples from other Davis Music Fest venues, and sharing them over the air and via social media.

KDRT and DCTV are projects of non-profit community media center Davis Media Access, using media and local content to strengthen community since 1988. Learn more at http://davismedia.org or by calling (530) 757-2419.