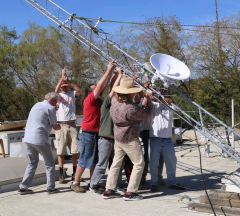 This fall, Davis Media Access (DMA) celebrates 29 years of operation, and 13 years of community radio. It was October 1988 that our antecedent, Davis Community Television, began as a public access station. In 2004, we launched KDRT 95.7 FM, a move that fundamentally changed our organization and necessitated rebranding. And 10 years ago, DMA emerged as the rebranded non-profit offering community media and digital technology services to the community.

As KDRT turned 13 last month, we finalized plans for installation of our new antenna, which community volunteers raised money for last year. On Sept. 30, a group of KDRT volunteers led by Station Manager Jeff Shaw and longtime KDRT Operations Assistant Jim Buchanan carefully installed a new antenna. While KDRT is still a low-power station, the new antenna is significantly boosting the station’s signal around the farther reaches of town.

KDRT volunteers are conducting a survey on signal reception around town. You can help by going to kdrt.org/fall2017survey and completing the short survey.