KDRT is a small station that makes so much possible. At the end of 2016, we raised money to boost the signal of KDRT by purchasing a new antenna. We're waiting...and waiting...for the rains to stop, and getting ready to do the engineering for the project. Target installation date is early summer, and we'll keep you posted! 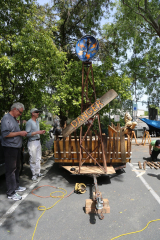 Once again KDRT will be in the Picnic Day Parade. Last year we were a walking group, but this year we'll be hauling a trailer with a live band.  It's a lot of fun, so come out and join the fun and give us a wave.  This year's theme is "Growing Together" and KDRT is where the grassroots grow, so we'll fit right in.  The parade is this coming Saturday, April 22 at 10 a.m.

Jesse Deere, longtime programmer of Dead Wax, will be retiring from the show soon.  Dead Wax is a vinyl-centric exploration of Americana, from classic country to roots rock and blues.  Fellow KDRT volunteers and programmers hope to take over in rotating shifts to keep the show going.

Shawn Witt, AKA Rainbow has moved his radio show, Music Eclectica, from Tuesdays at 10 a.m. to Fridays  at 10 a.m.  The program explores every genre of music in a unlimited fashion.

Sam Hawk's Independent and Local, which focuses on local music, has also moved to Fridays at 11 a.m. following Shawn's show.

Bill Wagman hosted Austin, Texas singer-songwriter Amilia K. Spicer on Live DiRT at the KDRT studio, Friday March 31. Spicer has been described as “a formidable singer, songwriter and pianist with a voice that ranges from soaring to smoky…possessing a keen observational lyricism and an innate talent for accessible melodies.”