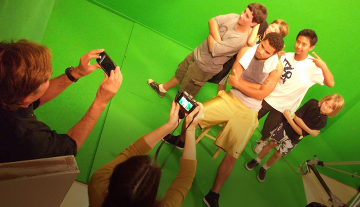 If you are interested in enrolling in one of our kids' camps for Summer 2016, don't delay too long! Some of our Summer camps fill up by March, and we know some parents try to coordinate to be in the same camp as friends.

Davis Media Access offers two kinds of camps. In the production camp, participants will learn how to produce a program in DMA's television studio, including storyboarding, operating cameras and sound equipment, and media literacy training.  New this summer, campers will be able to take advantage of DMA's brand-new HD Field Cameras. They will also get an introduction to the radio booth at KDRT 95.7 FM, DMA's low-power community radio station. The course is team taught by DMA staffer Alex Silva-Sadder, with assistance from high -chool or college-aged assistants.

During Animation Camp, participants will learn how to plan and storyboard an animation, record dialogue and effects, and light and create stop-motion animations, as well as experiment with 2D animation and watch examples of various styles for inspiration.  The workshop is led by DMA staffer Alex Silva-Sadder, assisted by a high-school or college-aged production specialist.