Profile: DMA Intern Rising from Land Down Under 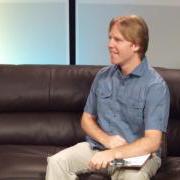 When Patrick Shearer and his wife Danielle moved to Davis earlier this year, he found himself with time on his hands and a need to explore his new town. Native to Australia, Shearer had established himself as a veterinarian in his homeland. He’d built up an impressive resume, working for private practices Down Under and completing an internship here in the States.

Though Danielle, who is also pursuing a career in animal health, landed a residency in Davis, Patrick’s credentials don’t allow him to practice in the States, and he had to find something to occupy his time. He said he was driving down Fifth Street one day and saw the elaborate mural on the side of the Davis Media Access (DMA) building. This instantly sparked interest and he knew he had to check it out, and that's when he found out about DMA.

He said he’s always had a passion for media, aside from his love for animals. He had had taken a television presenter’s course in Perth, Australia, so he thought DMA could open a door for him, and that an internship with DMA would be a great way to get involved in the community and meet people.

Today, Patrick is the host for DMA’s community-oriented talk show, “In The Studio.” To prepare for each show he makes contact with each guest as soon as possible, as well as browses around their websites, so that he can come up with questions and topics to discuss during each episode. “It’s tricky to host the show because it is all done in one shot,” he said, “ so I constantly have to be prepared to switch up my questions if the discussion starts to head in a different direction.” Patrick says he focuses intently on the open and close for each show because they are two key parts to having the show transition smoothly.

He said he loves volunteering for DMA because its goals are “straightforward and mandate a high quality of work.” He likes the community aspect of the station, in that anyone with any kind of experience can come in and produce his/her own show.

Aside from his internship, he tries to stay involved in the community by attending community events such as the Farmers Market and has even done some volunteer work with the UC Davis School of Veterinary Medicine.

Ultimately, Patrick said he hopes this experience helps him land a role in a nature documentary or television series, as he enjoys producing shows as well as presenting them. He loves this opportunity at DMA because he views it as great practice, and as a launch pad for bigger and better things down the road.