This column was originally published in The Davis Enterprise on Sept. 6, 2019

Since the Federal Communications Commission voted to tighten rules governing the franchise fees cable companies pay to cities, people are asking me how will it affect Davis, and the public, education, and government channels here — the first two of these operated by Davis Media Access, the third by the city.

In 2001, Josh Chuck and Greg Louie were roommates and students at UC Davis. Using the facilities at Davis Media Access (then called Davis Community Television), the duo produced 12 episodes of “Davision,” a college variety show. 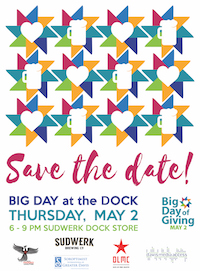 As the Big Day of Giving – affectionately known as Big DoG—gears up for its sixth year, several local non-profits have teamed up with Sudwerk Brewing Co. to carry on a community event that focuses on fun and philanthropy.

Davis Media Access, Davis Music Festival, Davis Phoenix Coalition, and Soroptimist of Greater Davis are the combined force behind Big Day at the Dock, to be held Thursday, May 2, 2019, from 6-9 p.m. at the Sudwerk Brewing Co. Dock Store, 2001 Second Street in Davis. Davis Media Access and Davis Music Festival began organizing Big DoG events with Sudwerk five years ago, with the event growing and other partners joining over time. This year's event features a record 27 area non-profits participating.

As of June 30, we have met our $30,000 fundraising goal. Donations, whether by local businesses, donor-advised foundations, or individuals, keep KDRT on the air, and help support DMA's work on local elections & youth media services. We fundraise all year, but conduct our major drive during the spring months, with on-air fundraisers on KDRT in both fall and spring. DMA's donors and supporters make possible a great deal of the work we do. We appreciate you!

“Coverage of local elections is core to DMA’s mission of strengthening community through media, and a partnership benefit we offer to our city and community,” said Executive Director Autumn Labbé-Renault. She notes that because DMA is the only media center in Yolo County, they provide this service for contested races countywide when possible.

Under the direction of DMA’s Studio Manager Diane Dedoshka, this election cycle DMA has produced the following:

As resources allow, DMA will also record and air various election forums. Due to the limited amount of local content this cycle, DMA will not produce a program on election night. Labbé-Renault said links to individual segments, as well as a schedule of upcoming airdates are available at https://davismedia.org/election There are easy linkages from each video for sharing the content online.

Beginning later this month, the Yolo County Library is hosting a series of technology focused workshops at three of its branches. Attendees will learn how to use GoPro Hero 6 cameras, how to edit recordings, and add sound tracks to create a short movie. GoPro cameras will be available to Yolo County Library cardholders in good standing for limited borrowing between workshop dates.

Just like everything else, the current deregulatory craze at the expense of common sense is about to hit the Internet Access Industry, and WE NEED YOU to take 5-10 minutes and write a letter at the website www.savecompetition.com Please share liberally, as this is not being reported on in a major way.

Here is the crisis.:

We share this letter dated 8/28/18, from our friends at Omsoft Technologies:

Just like everything else, the current deregulatory craze at the expense of common sense is about to hit the Internet Access Industry, and WE NEED YOU to take 5-10 minutes and write a letter at the website www.savecompetition.com Please share liberally, as this is not being reported on in a major way.

Here is the crisis.:

How to get involved – attend an Orientation!

Curious about KDRT, DCTV or DJUSD Channel 17, and want to learn how Davis Media Access can help you further your goals? Plan to attend one of our General Orientations!

Orientations last about an hour and include the history of Davis Media Access, a tour of the facilities, and information on how to get involved.

Anyone is welcome to attend an Orientation, but to use the facility for your own productions you must live, go to school, or volunteer at an organization in Davis, CA. Davis Media Access does not charge for the use of our equipment and facilities but attending a General Orientation is mandatory.

This month’s session is Aug, 15, 2018 6:30 p.m. Register here. You may drop into the session, but reservations are appreciated.

Training for how to crew for a DCTV television production.  You will learn how to operate a studio camera, floor manage, and run the audio board in the control room. You’ll also learn how to set up and tear down the studio for a production, including the proper stowing of cables, configuring lighting, setting up microphones, and flipping the On-Air switch! Hands-on demonstration w/ Q.& A. Please wear closed-toe shoes and comfortable clothing! Free, but registration required.

This column was originally published in The Davis Enterprise on Aug. 3, 2018

It is four hours till we flip the switch that will put Davis’ new community radio station on the air. I’m in charge of the launch party, and tending to many last-minute details, when I see him—a tall, rangy man with a kind face. I’d met him some weeks before at an outreach event for KDRT, and he told me he and his wife had just moved to Davis from New Mexico. He’s now strolling towards me, introducing his wife, and they tell me they’re here to help.

And help, they did. As I recall, he stepped in and helped with sound that day, and she did what she does best – made connections with bands and community members. This memory is from a golden September day nearly 14 years ago—Sept. 24, 2004—as we prepared to bring community radio station KDRT on the air for the first time. The man was Jim Buchanan; his wife, Diane Crumley. Little did I know then what they would mean to KDRT, to the community, or me, and that 14 years on, we’d still be working and planning together.

Jim’s radio show, “Live Tracks,” was one of the original shows on KDRT, and he broadcast continuously on Thursday nights until taking a brief hiatus this year. (Good news for local music fans, though—as of two weeks ago, he’s back on the airwaves Thursday nights from 7-9). “Live Tracks” has always highlighted the countless live, local performances that Jim diligently records. As an exacting audio engineer, these shows simply won’t air if Jim doesn’t feel the audio is just right.

Together, they’ve been a steady presence on the first Thursday of every month at the Davis Odd Fellows’ Thursday Live! music shows in downtown Davis. Jim helps with the sound checks and the audio, while Diane tables at the back of the hall and reps KDRT and Davis Media Access. Month in and month out, year after year, they are such a fixture that co-organizer Juelie Roggli never fails to mention them by name.

If this is your first visit to our website, welcome, and thanks for visiting.

Davis Media Access (DMA) is a non-profit community media & technology center currently celebrating its 31st year of serving Davis and environs. Elsewhere on this website you can read about what we do; the purpose of my message here is underscore why we do it. DMA’s community-centered work connects us to what matters: newsmakers, schools, families, youth, teachers, local elections, policy makers, community activists, neighborhoods, social justice activists, other non-profits, businesses, libraries, veterans, senior citizens, musicians, artists, and more.

As the Big Day of Giving – affectionately known as Big DoG—gears up for its fifth year, three local non-profits have teamed up to create a community event with a focus on fun and philanthropy.

Davis Media Access, Davis Music Festival and Davis Phoenix Coalition are the combined force behind “Big Day at the Dock” to be held Thursday, May 3, 2018, from 6-10 p.m. at the Sudwerk Brewing Co. Dock Store, 2001 Second Street in Davis.

Big Day at the Dock features live music by local bands, information tables and giving stations from a wide variety of non-profits, a BBQ by Davis Firefighters, a photo booth, and of course the beer for which Sudwerk is famous. The event is an all-ages venue.

Please join us. Come hungry and thirsty, come to learn about non-profits with whom you may not be familiar, and help make the Bog Day of Giving 2018 one marked by generosity and conviviality. Questions? Contact Autumn.