Regardless of how one feels about the outcome of the election, it’s clear we’re a nation deeply divided. At such a time, Davis Media Access (DMA) reaffirms its commitment to providing platforms for the diverse voices in our community and beyond. Our work is rooted in protecting and promoting access to media tools and training, and to ensuring that all people have options for expressing themselves freely. In many ways, every day, we help boost the signal of what’s happening in our community.

My early career included stints as a newspaper reporter and editor. I loved going to cover lectures, protests, and other events that opened my eyes to new information. It was my job to ask hard questions and look for more than one viewpoint or source. Newsrooms were very different places back then, and news outlets were owned by many hundreds of corporations. Since I’ve been working in non-commercial community media—20 years this month—commercial media in this country has endured consolidation and a loosening of restrictions on media cross-ownership, to the point where 90 percent of major media are owned by just six corporations. I’ve written reams about these issues, and about the dangers of watering down and homogenizing the Fourth Estate. In lieu of actual news, we’ve become a nation of news-feed junkies reinforcing our own stereotypes via the echo chamber that is social media. 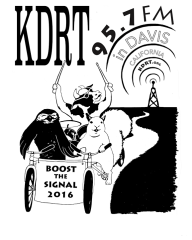 While there are many reasons to support KDRT and Davis Media Access, our mission to amplify community voices is vital at this time. We've talked to listeners, we've tallied survey results, and we know some of you can't hear us very well! We have a plan, and now we’re asking you to Signal Your Support.

KDRT’s very first Fall Fundraiser aims to raise $5,200 for a new antenna to Boost the Signal across Davis. Jeff Shaw, who serves both as DMA’s production manager and KDT’s general manager, explains. "Our antenna was hastily installed in 2008 when we had to change frequencies, and it’s less than ideal –we've found our signal reach is not ideal for many listeners in Davis. We want to improve our signal so everyone in Davis can hear KDRT 95.7 FM clearly."

To donate, visit here. The fundraiser kicks off Nov. 28, but early-bird donations are welcome, too, of course! Please help us increase our reach across Davis: Boost the Signal! Don't miss the selection of thank-you gifts available on the donation page.

KDRT’s programmers and volunteer Management Team invite you to tune in for some special fundraiser programming starting at 5:30 p.m. on Nov. 28, and running through Dec. 5. We hope to celebrate our success at DMA’s Holiday Open House on Dec. 5. Thank you!

Our DMA community celebrates the winter holidays in many ways, pulling from many traditions. However you celebrate, we hope you’ll join us on Monday, Dec. 5 between 6-8:30 p.m for our Annual Holiday Open House. If you’ve been before, you know it’s a jam-packed celebration of everything DMA, with abundant food and drink, and lots of fun folk. If you haven’t been, it’s a great time to learn more about DMA’s work, and meet some of the vibrant people who participate here. All are welcome; no RSVP necessary. Please drop by any time during the evening!
Did you know? Allergies to fragrance or multiple chemical sensitivities can be classified as disabilities under ADA, the Americans with Disabilities Act. There are a number of people within the DMA community for whom artificial fragrance is not just unappealing, but constitutes a health hazard. This includes perfume and cologne, scented soaps, heavily scented deodorants, etc. Please help us make DMA a fragrance-free zone, and leave the fragranced products behind when you participate here. Thank you!

Curious about KDRT, DCTV or DJUSD Channel 17, and want to learn how Davis Media Access can help you? Plan to attend one of our General Orientations! We take a break from orientations in December, but return Jan. 18 at 6:30 p.m. Any potential volunteers should attend one of these, held monthly. They last about an hour and include the history of Davis Media Access, a tour of the facilities, and information on how to get involved. Anybody is welcome to attend an Orientation, but to use the facility for your own productions you have to live, go to school, or volunteer at an organization in Davis, California. Davis Media Access does not charge for the use of our equipment and facilities and attending a General Orientation is the first step for getting involved. Register now.

We’re saying farewell to summer and ushering in the busy fall season. The board and staff at Davis Media Access are hitting the pause button to share a little fun with some of our favorite folks before things get too crazy. Volunteers, donors, friends—you are invited! Here are the details: Friday, Sept. 16, 2016, 4-7ish DMA’s Backlot & Facility, 1623 Fifth Street We will provide: burgers and dogs, including veggie options, fixins’, chips, and cold drinks. We’ll have the paper goods and such, too. You provide: Your good company. Drop by at any point in the evening. There will also be cake in recognition of KDRT's birthday and a few others. We look forward to seeing you! If you can, please RSVP. Hope to see you there!

DMA General Orientation: Curious about KDRT, DCTV or DJUSD Channel 17? Would you like to learn how Davis Media Access could help you? If you want to get involved, volunteer, or use equipment, you must first attend a general orientation. The next one is scheduled for Wed. Sept. 14 at 6:30 p.m. The orientation includes the history of Davis Media Access, a tour of the facilities, and information on the many aspects and opportunities provided by DMA. Free & open to anyone who lives, works, studies or volunteers in Davis.

Davis Teen Animators’ Club has space for a couple more members. The club meets two Fridays a month from 4-5 p.m. at DMA. Members must be between 13-17 years old, live or go to school in Davis, and be interested in hands-on traditional or computer animation projects. Email agsilva@davismedia.org if interested. Read more about the club at the Davis Enterprise

Available to DJUSD students, DMA’s internship provides hands-on experience and exposure to many aspects of community television production. The internship focuses on coverage of DJSUD sporting and performing arts events, as a component of DMA’s partnership with DJUSD Educational Access Television Channel 17.  Interns must be at least 16 years old and able to work 3-6 hours per week, generally between 5-10 p.m. Additionally, they must be self-motivated, good communicators, and able to work well with a diverse group of people. Training is provided, and academic credit is available when possible.

Please see the internship description for more information and to apply. Interested applicants may submit a resume or brief letter describing their skills and any personal goals related to the internship. Please submit to DMA Production Manager Jeff Shaw at info@davismedia.org.

In 1986, Davis Community Television was not yet in existence, but local programming was produced under the auspices of the Davis Community Cable Co-Op. A volunteer producer then and now, Jon Li shares the following:

We did a city council election show live at The Palms, beginning at 8 pm. I was the host. We had six bands play, with each of the four candidates for two seats having their turn to talk between the bands.

That September, I started interviewing the hundreds of interesting people in Davis, beginning with Mayor Dave Rosenberg. I read a 15-minute argument about the new General Plan process, and lawyer Dave refuted each of my points. Maybe my best show was Ken Watt, the evolutionary ecologist: I spent an hour in his office the day before trying to get in a word edgewise; on camera, Ken spoke for 15 minutes, and I asked if he had anything else he wanted to say, and he said no, so I had to think of something: “What do you think about the future of computers?” Ken said, “You know I love computers,” and he filled the air with the future.

The volunteers for “Artist’s Connection” have been producing their show monthly for just about two years, with award-winning San Francisco journalist Kevin Fagan as host. The program features topic-driven interviews of artists with questions that go beyond persona and performance, revealing the reasons behind the choices that artists make, and giving viewers a glimpse through the eyes of the artist. It’s focused heavily on performers in Yolo County.

This month, Producer Sam Hawk told us the show would draw to a close as Fagan (also a musician) pursues writing a book. It’s been a great run, and they leave behind a wealth of informative programming. Hawk says he’ll be transitioning to a radio show soon, and I’ll be listening for that.

The Vocal Art Ensemble digs deep into the salt of the earth, excavating
the cultural foundations that shape the ever-flourishing art of song.
Cultivating choral transplants across countries and generations, VAE
nurtures a musical garden of human experience, through the common
grounds of life, death, faith, serenity, love, and dreams. Collaborating in this program will be ceremonial sound practitioner
Rene Jenkins, who uses ancient indigenous instruments to harvest
timeless soundscapes of magical dimensions.

Spanning 10 stages with 45 bands, the Davis Music Fest rolls into it's 6th year.  The festival benefits both Davis School Arts Foundation and the DHS Blue & White Foundation. Local favorites West Nile Ramblers, Rita Hosking Band and Gravy Nation will be playing along with many out of town bands.  No matter what you'll find a band you enjoy throughout the event.

Davis Shorts: Current DMA volunteers and producers are welcome to attend "Davis Shorts" on May 25 at 7pm. Davis Shorts will be a screening of DMA Producers (& friends) short-form completed work, current drafts, or other projects intended to provoke discussion.  Seating is limited- use the registration link to guarantee a seat!

Davis Media Access (DMA) has been described as “part of what makes Davis, Davis.” I believe that reflects how DMA is connected to–and supports—so many different aspects of our community that it’s become part of the fabric. Like any fabric, DMA is woven from many brightly hued and different threads, and we’re stronger together.

DMA is currently doing its annual funding appeal. It’s important that we raise this money each year, as it keeps KDRT 95.7 operational, and it helps support our local election and youth-media efforts. We’re more than halfway through May, and more than halfway to our goal of $25k, but that still leaves us with another $12k to raise over the next couple of weeks.

What is DMA? It’s three big projects (public access TV, educational access TV, and community radio) that together comprise a small staff, a large volunteer base, and a whole lot of learning and doing. DMA operates and staffs a media center and helps community members produce and distribute content across local television, radio, and the Internet. Using the framework and resources established nearly 27 years ago by the City of Davis, we’ve leveraged those to include a radio station, four open-source websites, video and audio streaming and archiving, and support for a tremendous variety of individuals and community organizations. 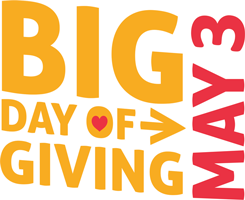 The Big Day of Giving is coming up May 3, 2016. Please support Davis Media Access. We need to raise $25K by June 1 in order to help fund KDRT. By donating during BigDOG your donation goes further matching funds and also gives us a chance to win prizes which in turn leads us further toward our goal.

Signup for our monthly email newsletter